To assess market prospects in a climate of unusual uncertainty it helps to consider the UK’s underlying economic health separately from the potentially disruptive influences of geopolitics.

GDP growth for 2018 looks set to come in at around 1.3%, with a lacklustre start affected by adverse weather and weak consumer spending, offset by an acceleration through the summer.  Towards the end of the year growth appeared to be faltering again, with survey evidence pointing to a decline in business confidence and investment, and reduced consumer confidence.  Conversely, the labour market remains strong, with record levels of employment boosting tax receipts, and prompting the Chancellor to declare that the end of austerity is in sight.   This has raised household spending power as earnings growth has accelerated ahead of inflation, which has eased in recent months.

This sets the context for what will happen in 2019. Based on the UK Treasury’s December survey of independent forecasts, most forecasters expect marginally stronger growth this year, averaging 1.5%, but with individual views ranging from 0.7% to 3.3%, reflecting an unusual level of uncertainty about short-term prospects.  Barring a further significant devaluation of sterling, CPI inflation is expected to be close to target at 2% for the year, with real incomes continuing to grow as average earnings rise by 2.9%, and a median forecast of 1.25% for the base lending rate at the year end, compared with 0.75% today.

The economic outlook from here is more than usually dependent on the path of domestic and international politics, which looks set to guarantee further financial market volatility over the coming months.  At a global level the threat of an accelerated US/China trade war seems to have receded somewhat as both sides have adopted a more conciliatory tone, but US foreign policy remains unpredictable.  In Europe, political conflicts remain over the populist Italian budget, and the French government has been forced to re-think its strategy in response to the “gilets jaunes” protests.

Of all the political risks, the likely outcome of the Brexit deadlock is perhaps least clear at present.  The uncertainty appears to be weighing on consumer and business sentiment.  Until alleviated, this threatens business activity and growth.  The entrenched and starkly polarised views on Brexit, and the narrowness of the 2016 “leave” mandate, have left politicians seemingly unable to broker an acceptable compromise.  There is currently no political consensus for any of the possible Brexit options.

With the clock ticking towards the March 29 Brexit deadline, and little sign of further concessions from the EU, MPs are now under intense pressure to agree a way forward.  Unless a plan emerges over the course of the next month, there must be a likelihood that the March 29 deadline will be extended to allow more time to find a solution.

“Soft Brexit” options are argued to protect jobs, but inevitably involve a ceding of UK influence.  Almost all the published scenarios for different Brexit options show marginally lower growth under “soft” outcomes compared with continuing EU membership, with the weakest prognosis attached to a no deal exit.  In practice, once a clearer Brexit strategy emerges, whatever the eventual model, businesses and consumers will be better able to plan ahead, and confidence could revive quite quickly.

UK house prices expected to grow in 2019, with regional variations to persist

What does all this mean for the outlook for the UK’s residential property market?  History shows that house price growth is closely linked to the economic cycle.  Tracking annual data since the mid-1950s shows that national average house prices fell only twice, in the recessions of 1991 and 2008-9.  Residential prices are generally more resilient through economic cycles than commercial property values.  Underlying demand for housing is driven by demographics, with population growth and household formation only marginally affected by the state of the economy.  By contrast, commercial property demand is closely linked to the business cycle, and the effect on pricing can be compounded by fluctuating supply from typical “start-stop” construction cycles.

Anecdotal evidence from RICS surveys and FCA mortgage lending statistics shows that housing transaction volumes have held steady at around 100,000 sales a month (seasonally adjusted).  However, falls in the number of new buyer enquiries and new seller instructions towards the end of 2018 suggest some nervousness, probably linked to the uncertainties generated by the latest twists in the Brexit debate.

Some local housing markets are, of course, more volatile than others.  Prime properties and the most expensive locations in and around London are a good, current example, where prices have been falling, having strongly rebounded after the global financial crisis.  By contrast, ONS data point to moderate price increases of over 4% during 2018 for much of the Midlands and parts of Northern England, and suggest national average growth of a little over 2%. Forecasts from the Treasury’s December consensus survey point to continuing subdued house price growth of 2.1% nationally for 2019.  None of the 15 forecasters in the survey is predicting an overall decline, consistent with the fact that none is anticipating a recession. This assumes a Brexit deal that avoids the more doom-laden predictions of some commentators under a “no deal” scenario. 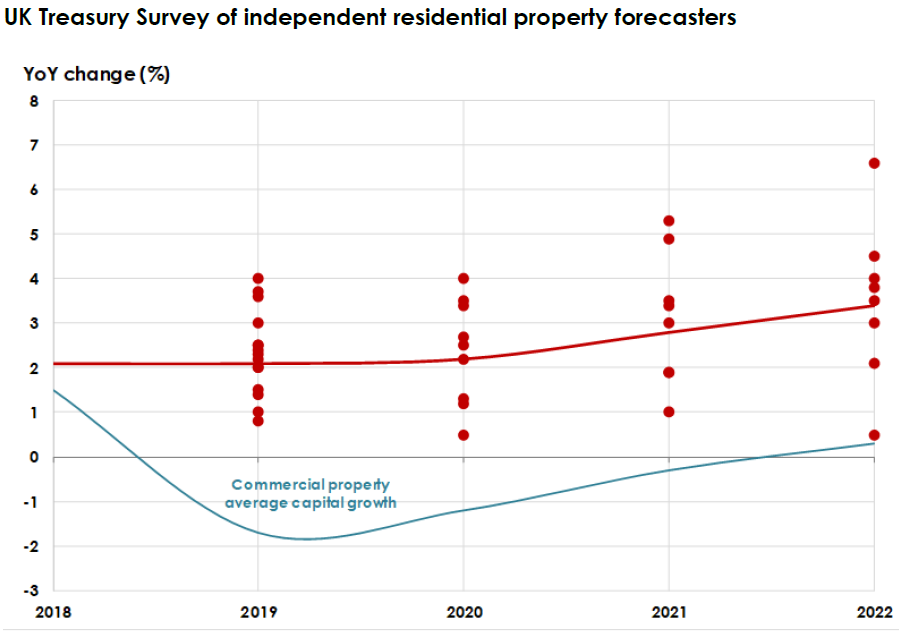 Note: Dots show individual residential forecasts for each year from organisations participating in the Treasury survey.  The red line shows Hearthstone’s estimate of the 2018 ONS HPI out-turn based on published data to October and the average of “new“ forecasts for subsequent years. The blue line shows the average “all property” capital growth forecast from the IPF survey

There will be regional differences. We expect prices to weaken a little further in the more expensive areas of London and its commuter belt, with continuing modest growth across most other regional towns and cities.

The Treasury’s November forecast survey, which included longer-term numbers to 2022, suggests a modest acceleration in GDP and house price growth beyond this year.

One factor remains consistent, and that is the continuing shortage of good quality housing in many locations. Figures from the NHBC show that housing starts and completions remain stuck at around 10,000 a month. The social housing sector is delivering around 3,000 per month, but the combined annual total of 150,000 falls well short of the Government’s assessment of need of between 250,000 and 300,000.

Typically, uncertainty fuels rental demand.  This seems to be happening, but at the same time the supply of rented accommodation has been hit by a series of tax changes causing many small private landlords to retreat from the sector.  This is reflected in the RICS figures on new landlord instructions, which show a decline in the number of rented properties coming on to the market, despite an increase in new supply from institutional investors.  This has created local supply shortages, which we expect to translate into rental growth. The RICS forecasts annualised rental growth of 3.1% over the next five years, whilst price growth projections stand at 2.3% on the same basis.

Residential property can offer defensive qualities and resilience for investors

The unusual combination of geopolitical and economic circumstances is contributing to a period of equity market turbulence and sustained low bond yields.  UK businesses and consumers have reined in spending, evidently adopting a “wait and see” approach until some of the Brexit fog clears.  Meanwhile, the residential property market, while not immune from wider economic forces, offers some defensive qualities. In past cycles as well as the current one residential property shows its value as a portfolio diversifier at times of uncertainty. 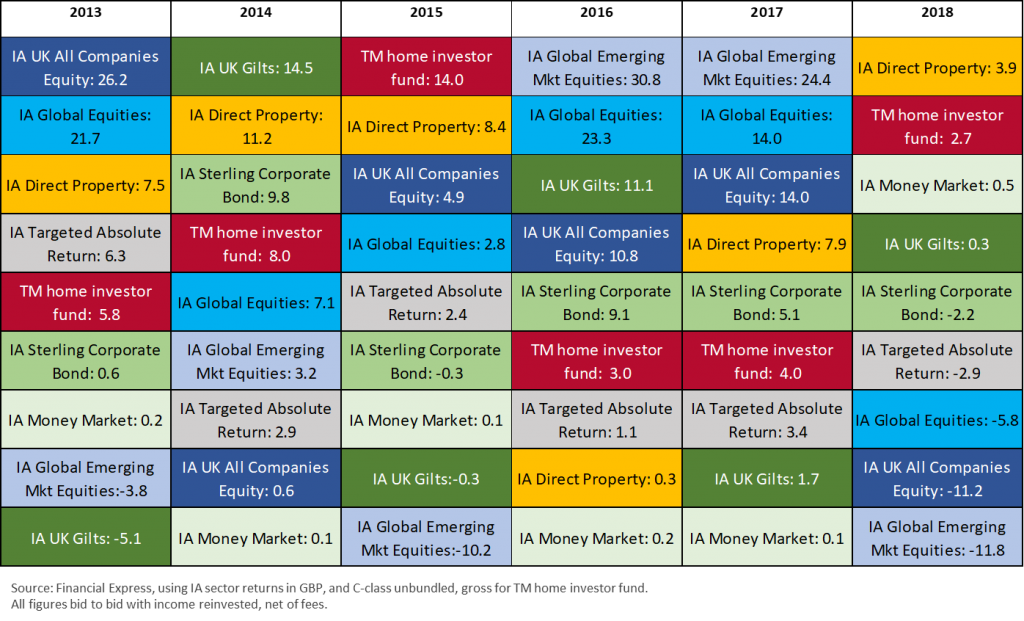 A combination of demographics and lifestyle effects means that there is strong demand but tight supply for rented homes in many locations across the country.  The prospect of a more subdued transaction market in 2019 can also be seen as an opportunity for investment buyers, and particularly those able to conclude bulk purchase deals of new stock from the house builders.

You can view the PDF below:

This presentation describes the TM home investor fund, with the objective of allowing retail clients to gain an overview of the product’s recent history. It should not be considered advice or an invitation to invest.

As with all investing, your capital is at risk. The value of your portfolio with TM home investor fund can go down as well as up and you may get back less than you invest. LEARN MORE ABOUT RISK.